Compared with other technology companies, Samsung Electronics is a company with a long history, as it was founded in 1938 in Korea. It has been the leader of the global smartphone industry for many years. However, its global sales of smartphones is now under attack from fast-growing Chinese rival Huawei Technologies. In fact, Huawei has already defeated Samsung in China, which is the world’s biggest market of smartphones. Globally, from IDC data, the Shenzhen-based company became the third-largest smartphone maker in the second quarter. According to the article, sales of Huawei are increasing all around the world, especially in the Mideast and Africa. With the increase of Huawei’s brand awareness and reputation, more and more people are beginning to choose Huawei because of its performance and innovation. However, there are some analysts who believe that Samsung’s lead in smartphones against Huawei remains large and that the South Korean company is a far more established consumer brand. Thus, it is hard for Huawei to narrow that gap. 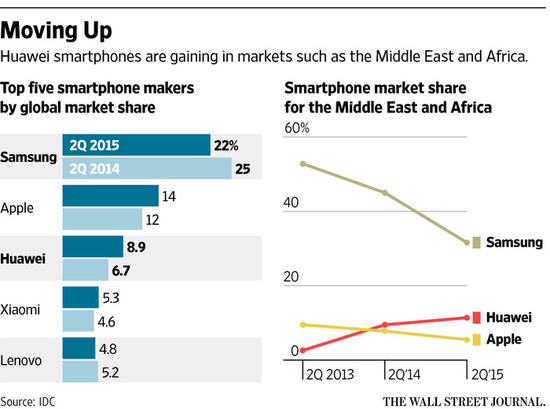 Huawei Technologies Company was founded in 1987 in Shenzhen city, which is the home of many famous Chinese companies. The main business of Huawei is producing and selling telecommunications equipment and services. Nowadays, Huawei’s products and technologies have been sold in more than 100 countries. The company serves 45 members of the top 50 global communication operators, and one third of the Earth’s population.

As far as I am concerned, I think the success of Huawei is based on its marketing strategies and innovations. I disagree with the analysts who think brand awareness is a disadvantage of the relatively young Huawei company. On the contrary, I hold the view that its youthfulness is a special asset of the company. Huawei has more innovations than most of its competitors. It spends almost 6.5 billion dollars per year on R&D. It dares to try new things and is never afraid of of challenges. For example, in China, Huawei began its smartphone business with low-end products that offered high quality. After some years, Huawei finally became a leading supplier of smartphones in China. After that, it aimed at the premium market and began to produce high-end smartphones. Huawei also cut down some products at the low end of its product line. It was laughed at and doubted by many competitors at first, because 400 dollars is the red line of the Chinese domestic cellphone market. However, the price of new smartphones from Huawei is more than 600 dollars. It’s really an ambitious attempt and challenge for Huawei. This is also a revolution for the Chinese smartphone industry.

The traditional sales model of cellphones is to cooperate with local mobile communication companies and ask them for help. However, Huawei preferred to use retail sales because it could bring more benefits for both consumers and the company. With the development of the B2B model, there are a lot of smartphones from Huawei that were sold online. For example, November 11 is “Singles Day” in China, or Chinese black Friday. In 2015, sales of Huawei smartphones was over 100 million dollars in 24 hours on that day.

Huawei’s overseas strategy is also an important part of its success. In 1995, Huawei began to enter international markets. To avoid direct competition from some huge transnational corporations, Huawei began to focus on developing counties in Africa and Asia. They also focused on markets in the Middle East. In the Middle East place, many of mobile phones are sold through retailers rather than telecom operators, so it is very difficult for sellers to expand their marketing channels of smartphones. Furthermore, all products that Huawei exports are high-tech products of its own brand. Huawei chose one of the hardest roads from the beginning. However, it achieved great success, and Huawei’s products are known in most developing countries. Thus, it’s hard for other smartphones companies to catch Huawei in these markets. Huawei’s model, “follow your own course and let people talk,” is an attractive strategy that we need to learn. Therefore, for marketers, we cannot just follow our competitors; we should have our own strategies. Innovations, suitable strategies and special marketing methods are necessary to compete.

Management is also a positive characteristic of the Huawei Company. Ren, the CEO of Huawei, is the largest shareholder and he held only 1.4% of the company’s stock. Considerable stock is also held by the employees of Huawei. In other words, all employees, not only managers, but also workers, are the shareholders of the Huawei Company. Thus, all staff members work very hard because their incomes are tied to the profit of the company. This gives great motivation and encouragement to the employees of Huawei. This special management style led Huawei to become a company with high efficiency and innovations.

I believe Huawei will be the most successful technology company in the future. However, there are some problems that Huawei needs to consider. Cutting down the low-end product line is one of the ways to increase profit and utilize the reputation of products to attract customers. However, the high-end product is covered with a higher brand premium, itself, and Huawei needs to wait a long time to achieve this goal as well. Second, I am afraid we have to continue being concerned whether Huawei really tore up the “technology” label. Because most people still think Huawei is a label of technology. The technologies of Huawei are more attractive than its products. Third, from the point of view of global marketing strategy, whether sponsoring the five major European league matches or inviting famous people to advertise its products. Samsung has already used this strategy before. Thus using the same strategy as Samsung is not going to help Huawei completely defeat Samsung. With the fierce competition of the global market, Huawei still needs to find unique marketing methods to come out on top.

4 thoughts on “Huawei Chips Away at Samsung”